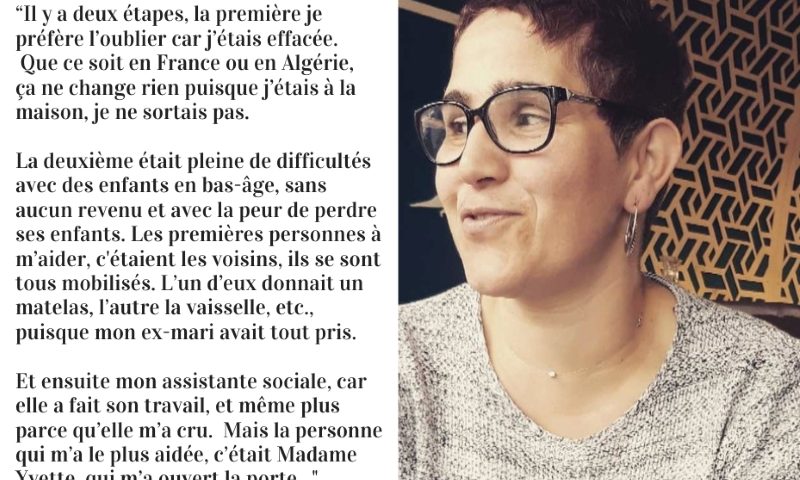 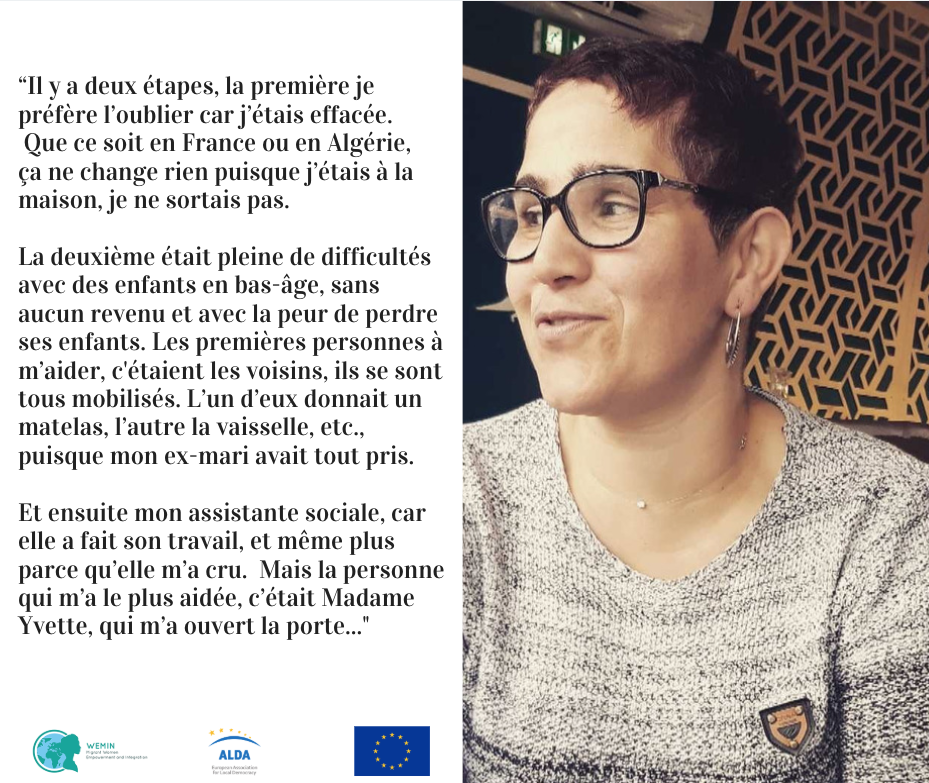 There are two stages [in my journey], I prefer to forget the first because I felt like I was “erased”. Whether in France or Algeria, it doesn't change anything since I was at home, I wasn't going out. The second was full of difficulties with young children, without any income and with the fear of losing my children. The first people to help me were the neighbours, they were all mobilised. One gave a mattress, the other gave the dishes, etc., since my ex-husband had taken everything.

And then there is my social worker, because she did her job, and even more because she believed me. But the person who helped me the most was Mrs. Yvette, who opened her door to me. She was a volunteer at an NGO.

Once, I went there, I had no income or family allowances. My social worker sent me there for the food aid basket. I remember it was the beginning of the school year and I didn't even have money to buy my son a school bag, I cried and Yvette came to me, I told her my story, my story touched her and she kind of adopted me. I must admit, it wasn't easy. I didn't know any laws, I had young children. She was the one who explained everything to me, the system, how it works, really everything!

Then I started going out, working and all this with fear in my stomach, fear of losing my children because I was being chased by my ex-husband in Algeria. I was summoned to the police station, I was received like a criminal, I came across a really unpleasant policeman! So I kept this fear, I wanted my children to be well. I wanted to emancipate myself and work and not just stay in France to benefit from the help as my ex-husband used to say. I didn't come here by choice, I was forced to come.

I found myself alone with my children, and with my ex-husband still receiving the benefit, I went to the office for family benefits and told them my story, but as they say, "the law doesn't protect fools". I said everything, but everything I said was used against me, I was told that the housing assistance benefits are attributed to "Mr. and Mrs.", so I had to refund the overpayment. I ended up with a debt of €8,000. I tried to write letters but nothing worked and I paid it back.

To help get a first job, I was receiving the allowance for single women and I was invited by the office for family benefits, it was an opportunity for anyone in a single-parent situation to help them work. I went there, and I was given written and oral tests, which I passed. Then I was directed to an association for women or anyone who wants to return to work. I also did training courses with an employment centre for refresher courses in French. I really had to do these upgrades because I knew the system in Algeria, but not here. I encourage all women to go to this association for people who want to return to work because I was able to choose, say ‘I can do this, I want to do this’. I was able to use my knowledge, my experiences in Algeria for example.

She [Yvette] showed me everything, the system, the culture, the way of life. I celebrated Christmas with her, she dressed as Santa Claus, my children believed in it, they were naive. She supported me, she coached me, now we use that term, well she coached me! I didn't do anything without her, I did everything with her. Now, we see each other from time to time so as not to cut ties, to get news, she considers me a member of her family.

There is also Mrs. Berthelot, my lawyer. It's thanks to her that I succeeded. I worked at Mr. and Mrs. Berthelot's house and while talking to her husband, I told him my story, he told me that his wife is a lawyer. I told her I no longer trusted my former lawyer and asked her, "Can you take her place?" It is thanks to her that I have managed to be relaxed and have a clear conscience, without thinking that one day he [my ex-husband] will come and take the children from me. In fact, there is no law that says that my children belong to me or to him. Then there was a judgment specifying that the children have to stay with the mother but that the father can come and see them whenever he wants. And that's when I met Faïza. Every other weekend I went out, I enjoyed it and so I met Faïza on the "on va sortir" [we’re going out] website, and we have a lot in common, we're from the same area, we have a similar situation, we're the same age, our children are about the same age too and they go to their dad's house on the same weekend. She became my coach on the heart side, intimate, personal. Because even in terms of dating, I was still in a submission pattern, if it wasn't for her I would have made the same mistake as the first one, with my ex-husband.